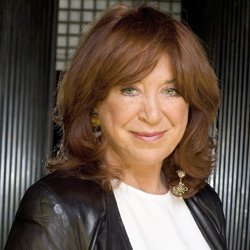 Born and raised in Liverpool, La Plante trained for the stage at the Royal Academy of Dramatic Art (RADA). After finishing her studies, she began her career as an actress appearing with the Royal Shakespeare Company in a variety productions, as well as popular television series including Z-Cars, The Sweeney, The Professionals and Bergerac.

In 1983 La Plante had her first scriptwriting breakthrough when she created and wrote the six-part robbery series Widows for Thames Television.

Following the overwhelming success of Widows, La Plante became a sought-after crime writer and subsequently signed her first book deal with Pan MacMillan. Her debut novel, The Legacy, was published in 1987 and received both critical and best-seller success. Her second, third and fourth novels came soon after – The Talisman (1987), Bella Mafia (1990) and Entwined (1993) – all of which became international best sellers.

In 1990 La Plante started working on her next television project, Prime Suspect, which was released by Granada in 1991. Prime Suspect starred Helen Mirren as DCI Jane Tennison, airing in the UK as well as on PBS in the United States.  Lynda won an Edgar Allen Poe Writer’s Award for her work on the series.

In 1992, Lynda’s highly acclaimed series, Civvies, starring Jason Isaacs, Lennie James, and special guest Peter O’Toole,  was  broadcast on the BBC – and  has recently been re-released.

In 1993 La Plante formed her own television production company, La Plante Productions and through her new company she wrote and produced high-rating series The Governor (ITV), Supply and Demand, Killer Net (Channel 4), Mind Games (ITV) and acclaimed series Trial and Retribution and The Commander (ITV). During this period La Plante also released the Cold series of books; Cold Shoulder, Cold Blood and Cold Heart, followed by Sleeping Cruelty (2000) – adding to her list of best sellers.

Above Suspicion
Honoured at the Cologne Conference International Film and Television Festival with the prestigious TV Spielfilm Award for the television adaptation of the novel, Above Suspicion.

CBE
Awarded a CBE in the Queen’s Birthday Honours List for services to Literature, Drama and to Charity

Widows
Nominated for a BAFTA award in 1982.

The LSF is one of the best festivals that I have ever attended. There was great talent there... and I hope to find a client or so!!"