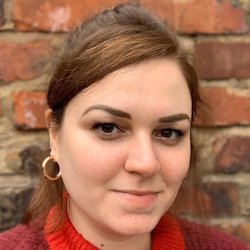 Having cut her teeth on commercials and promos Margot Douglas has spent the last few years coordinating on award winning short films. Margot produced her first award winning short in 2018, and has a BFI funded film currently in post production. Along with short film making Margot has also worked in television, coordinating for the BBC in factual, children’s and creative. She joined Old Hall Films in Febraury 2020.

Proud of who we are and where we come from, Old Hall Films is a Manchester based company that produces feature films, television dramas & narrative shorts.

Currently, Old Hall Films has its debut feature film in post production, as well as three short films and two television shows in development. We also have a short film starting its festival circuit and two award winning shorts completed. Producer Margot Douglas has been with the company for a year and a half, having previously worked in commercials, television and film as a freelance producer.

What were looking for:

We’re looking for low budget feature film scripts, in particular genre films, with an authentic voice and clear vision. We’re after scripts that feel fresh and innovative, and focus on stories that haven’t been or are rarely seen on screen.