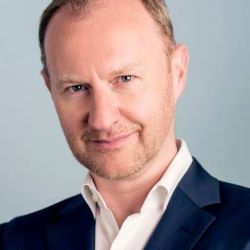 Mark Gatiss has had a long and varied career as a writer and producer behind the camera, as well as being a critically acclaimed actor and published author.

Thanks to a childhood interest in Doctor Who, his early writing was devoted to the series. His earliest published fiction was a sequence of novels in Virgin Publishing’s New Adventures series of Doctor Who stories.

Mark’s great early success on television was as part of the comedy troupe The League of Gentlemen, where he both wrote and appeared onscreen.

Like Steven Moffat, Gatiss is one of the few writers to have written for all four Doctors in the modern television revival of Doctor Who (Christopher Eccleston, David Tennant, Matt Smith and Peter Capaldi). Mark is also the writer and executive producer of An Adventure in Space and Time, a 90 minute dramatisation of the genesis of the series as part of Doctor Who’s 50th Anniversary celebrations in 2013.

Gatiss is also the co-creator and executive producer of Sherlock, the hit BBC series starring Benedict Cumberbatch and Martin Freeman.  In the series he also plays Sherlock’s brother Mycroft Holmes. Sherlock has seen unprecedented success across the globe, with Series 3 in the UK billed as the most watched drama on British television in a decade. The series has won a total of nine Emmys.

Mark’s other writing credits for television include episodes of Nighty Night (2004 – 2005), the ghost story miniseries Crooked House (2008), which he also executive produced, two episodes of Agatha Christies’ Poirot, his adaptation of HG Well’s The First Men in the Moon(2010) and all three episodes of the documentary series A History of Horror (2010) and its one off sequel Horror Europa (2012), all of which he also presented.

More recent acting roles include those as Stephen Gardiner in the BBC’s Wolf Hall and Tycho Nestoris in HBO’s Game of Thrones.

Mark Gatiss is appearing at the following sessions:

I absolutely loved everything about LondonSWF. It gave me a HUGE boost. I gained so much. Not just on craft, but discovering that networking isn't scary, it's rewarding!"