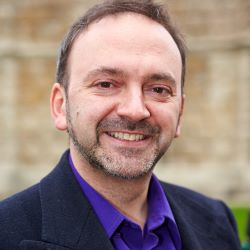 Matt Fitton has been writing and script editing audio drama for Big Finish Productions since 2011. He has scripted new adventures for Doctor Who incarnations, from Tom Baker to David Tennant, and is currently writing the ongoing series with Paul McGann’s Eighth Doctor. He also writes and edits spin-off adventures of other Who characters, including Missy (Michelle Gomez) and River Song (Alex Kingston).

Matt works across other ranges too, including Terry Nation’s Survivors (his opening episode was nominated for the BBC Audio Drama awards), a revival of the 1980s supernatural chiller The Omega Factor, and Big Finish Original thriller Transference.

Matt Fitton is appearing at the following sessions:

Big Finish creates official audio dramas such as Doctor Who and Sherlock, adding depth to these worlds in ways TV cannot. Discover how to write exciting, limitless audio stories – from sci-fi to horror or futuristic to historical, audio drama can be anything.