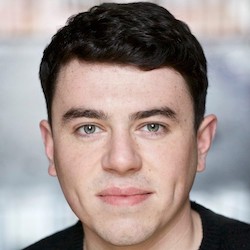 Matthew Joseph-Campbell graduated from New College Lanarkshire’s Acting & Performance course in 2016. After graduating, Matthew toured Scotland with Baldy Bane Theatre Company before appearing in SLLC/New College Lanarkshire’s Christmas pantomime as Buttons. He also worked with BBC Scotland’s ‘The Comedy Unit’.
In 2017, filming began on series one of Weegies, with Matthew playing the part of ‘Paul’ in the series. In 2018, Matthew took part in the Oran Mor’s famous ‘A Play, a Pie and a Pint’, as he was cast in ‘The Last Picture Show’ which toured the Oran Mor, the Traverse Theatre and The Lemon Tree in Aberdeen.

Matthew Joseph Campbell is appearing at the following sessions:

Sensational speakers! I’ve never been in tears at the end of a conference before! From newbies to global giants; a huge range of insight – and all delivered with passion!"