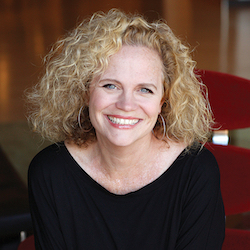 Meg received an Oscar nomination for Best Screenplay for Pixar’s mega hit Inside Out, for which she also won an Annie Award. Her other Pixar script The Good Dinosaur also received a Golden Globe nomination. She recently wrote Captain Marvel and co-hosts the podcast The Screenwriting Life with fellow Pixar writer Lorien McKenna.

LeFauve started her career as a producer and President of Jodie Foster’s film company Egg Pictures. During that time, LeFauve produced films which were nominated for an Emmy, a Golden Globe, and was awarded a Peabody for the Showtime film “The Baby Dance.” LeFauve also produced The Dangerous Lives of Altar Boys which won the 2003 IFP Spirit Award for Best First Feature.

LeFauve has been a consultant to Screen New South Wales and Screen Australia and has been a mentor at many writing labs, including Cinestory Script Sessions, the Meryl Streep lab, and the Sundance Creative Producer Lab. LeFauve has taught at AFI and served as co-chair of the Graduate Producers Program at UCLA’s School of Film and Television, where she taught master-level story and development classes for over seven years.

Raised in Warren, OH, LeFauve graduated from the Syracuse University Newhouse School and currently lives in Studio City, CA with her husband and two sons.

Meg LeFauve is appearing at the following sessions:

A Screenwriting Life… How to survive, thrive and find meaning in our work with Meg LeFauve and Lorien McKenna

Screenwriting success lives at the crossroads between heart, soul AND craft, savvy and experience. Join us at that crossroads for an inspirational and also practical session to connect us all with our WHY so we too can follow our own true path to success.

The best-run, best-organised and best-attended writers' fest I've ever seen..."