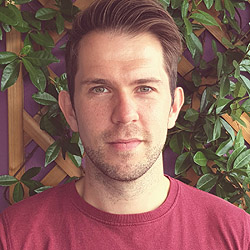 Michael is one half of The Clarkson Twins, writers repped by Independent Talent and ICM. He and his twin Paul have written and co-produced for Steven Knight’s new series See, which will launch Apple’s VOD platform. They have also been script consultants on HBO and BBC’s adaptation of Phillip Pullman’s His Dark Materials for Jack Thorne.

Michael has just completed his second script for Amazon’s The Feed, working under show runner Channing Powell of The Walking Dead. The Clarkson Twins are working on active projects with BBC, Eleven Films, EOne, Eleventh Hour Films, and are adapting HG Well’s The Sleeper Awakes for TV with Scott Free Productions and Film Nation. Michael has an MFA in screenwriting from the School of Cinematic Arts at USC.

The highlights were Dominic Morgan, Chris Hampton, Peaky Blinders and Bridge of Spies. Loved the traditional PitchFest. Every person I pitched asked to read my script."