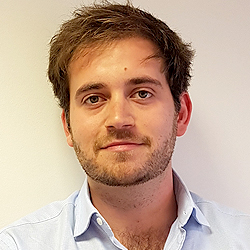 Michael is a founding partner of Clipper Media Capital, a London based film/TV production company with an emphasis on developing projects for the Chinese marketplace. Clipper operates dual development slates in English and Chinese, as well as operating a PRC sales arm designed to sell or pre-sell international content into the Chinese marketplace. Founded one year ago, highlights since inception include brokering a licensing deal with Tencent (China’s largest company), setting up a UK-China co-production with Shanghai Film Group alongside David Barron (HARRY POTTER x6, LEGENDS OF TARZAN) with Olly Parker (JOHNNY ENGLISH: REBORN) attached to direct and attracting Chinese streamer Youku to a project originating from Roland Moore (LAND GIRLS).

Michael was formerly the Creative Executive at Joe Wright’s Shoebox Films, building the TV slate of the award-winning film company by sourcing material, working with high-end writers and generating ideas. After Hollywood stints at 20th Century Fox, ICM Partners and Scott Rudin Productions, he worked alongside showrunner Beau Willimon on Netflix’s House of Cards. He then moved to HBO in New York, working on marketing/distribution campaigns for hit shows like Game of Thrones, True Detective and Veep, and subsequently for NBCUniversal’s International Studio in London.

He graduated from Johns Hopkins University’s prestigious Writing Seminars department. He sits on the BAFTA-Rocliffe New Writer’s Jury and on the BAFTA VR advisory board; participates as an executive at the London Screenwriter’s Festival annual Pitchfest event; and was recently invited to attend the Sheffield Documentary Festival – Europe’s largest – as a Decision Maker following Clipper’s Tencent deal.

Clipper is not interested in considering scripts set in China by writers who have no experience of the market. More interested in English language projects to fill gaps in development slate – authentic British stories revolving around authentic, relatable characters with unique voices which could play on BBC 3 or C4. Otherwise, well-written and plotty genre are always a good bet!

LSF gave me a much clearer understanding of the industry than I had before I came."