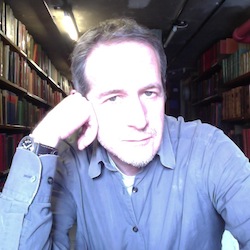 Michael oversees the activities at Film Nouveau, a script development company that ‘… takes screenplays dribbling with promise, and turns them into projects slobbering with potential’.  Film Nouveau’s current development slate includes his own ‘THE VISA’ and Owen O’Neil’s ‘THE SAFE’.

Michael’s most recent films have been the two award-winning ‘THE CURIOUS WORLD OF RACE WALKING’ and ‘JOE SMEAL’S WHEELS’.

Prior to co-scripting LEON THE PIG FARMER (Beyond Films) in the mid-90s, Glaswegian filmmaker Normand had worked in publishing, written educational dramas for Oxford University Press, been on the stand-up circuit for five years and had written comedy for radio and TV.

Michael either works on the scripts of others’ film projects, or on his own ones… “… either way, it’s all about the glorious self-flagellation of re-writing.”