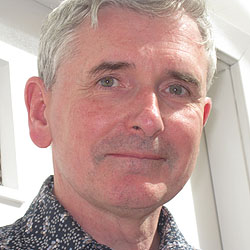 M.R.Carey is a screenwriter, novelist and comic book writer. Born in Liverpool, he worked as a teacher for fifteen years before resigning to write full-time.

He wrote the movie adaptation for his novel The Girl With All the Gifts, released in 2016. He has worked extensively in the field of comic books, completing long and critically acclaimed runs on Hellblazer, X-Men and Lucifer (now adapted for TV). His comic book series The Unwritten has featured repeatedly in the New York Times graphic fiction bestseller list. He is also the writer of the Felix Castor novels, and (along with his wife Linda and their daughter Louise) of two fantasy novels, The City Of Silk and Steel and The House Of War and Witness.

His most recent novel, published in May 2017, is The Boy On the Bridge, a free-standing story set in the world of The Girl With All the Gifts.