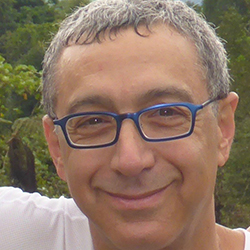 A Los Angeles native, Mike received dual bachelor’s degrees in journalism and psychology from Stanford University – and his Masters in Fine Arts in screenwriting from UCLA.

Mike’s big break was writing the Jim Carrey comedy “The Mask,” but embraces the learning curve he received working on the giant-rats-attack-a-college-campus film “Gnaw: Food of the Gods II” and “Darkman III: Die, Darkman, Die!” – co-written with Michael Colleary.

Mike and Michael co-wrote and co-produced the international hit thriller “Face/Off,” directed by John Woo and starring John Travolta and Nicolas Cage. The New York Times lauded the Oscar-nominated film as “one of the greatest movies of all time,” and Empire Magazine called it “the best action movie ever made.”  “Face/Off” won the Best Screenplay statuette at the 24th annual Saturn Awards.

More recently, Mike created and executive produced Cartoon Network’s first live action drama series “Unnatural History” for Warner Horizon Television.  He was a writer/producer on the Halle Berry/CBS sci-fi drama “Extant” – and worked in the same capacity on the CBS series “Salvation” from 2016 to 2018.

In development for 2020: “Demigod – the Madness of Herakles” set in Bronze-Age Greece (Millennium Films); “Boom Boom” – a Gen-X drama to be filmed in Niagara Falls, Ontario (Carousel Pictures, with Jason Stone directing) and “The Legend of Sinbad” (Millennium, Frank Coraci directing).

Mike is a voting member of the Academy of Motion Picture Arts and Sciences (AMPAS); the Writers Guild of America, and is also a nominating-committee rep for the Academy of Science Fiction, Fantasy and Horror.

Mike Werb is appearing at the following sessions:

The  body swap genre was turned upside-down and inside-out with the Travolta/Cage adrenaline pump Face/Off. And it all sprung from the minds of Michael Colleary and Mike Werb. Now they are joining us for our biggest, most outrageous Script To Screen yet.

The speakers were amazing; how Talent Campus got them is beyond me // 500 stars (out of 5)"