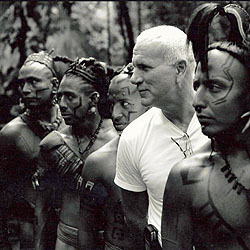 Active in the film industry for more than forty years, Ned has been producer in one capacity or another, and previously an AD, on over fifty feature films. From Apocalypto to Last of the Mohicans, from Wonderboys to Shanghai Noon, and from GI Jane to The 13th Warrior, Ned has worked with some of the best known directors of our generation.

A former professional ice hockey player, he got into films by being hired as Technical Adviser on the Paul Newman picture Slap Shot (dir. George Roy Hill, US, 1977), and after some acting roles progressed to the 1st AD position. Working through the 1980s and early 90s on films with directors like Danny De Vito, Norman Jewison, Robert Altman, David Mamet and James L Brooks gave Ned the grounding that in turn led to a eight-year stint as Head of Production at Caravan Pictures and Spyglas Entertainment in Los Angeles.