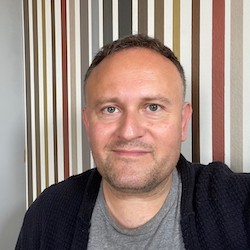 Paul ​is a Commissioning Editor for Sky Drama, executive producing a range of shows such as Tin Star, Intergalactic, Bulletproof, Strike Back and up-coming series The Fear Index & Extinction.

He was previously Head of Drama Development at Big Talk Productions where he oversaw E4 comedy-drama Youngers and the BBC1 family drama Our Zoo.

For many years he was an in-house Development Producer and Script Editor at BBC Drama Production and BBC Drama Northern Ireland, driving a raft of original series, serials and singles, including One Child, The Paradise, The Mystery of Edwin Drood, Money, The Interceptor, The Last Days of Lehman Brothers and Messiah.

Paul Gilbert is appearing at the following sessions:

"LSF gives me an opportunity to listen to the people who have made it in screenwriting, take in advice, feel inspired and motivated."