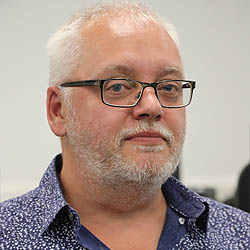 Phil entered the film industry working for the MEDIA Programme’s development fund in the 1990s, latterly as Head of Fiction.

From 2000-2012 Phil was full-time screenwriter, developing over 20 feature length scripts including produced feature films, Thunderpants (Pathé, 2002) and I Want Candy (Ealing Studios 2007), five episodes of the BBC’s popular children’s TV series The Queen’s Nose, documentaries and web films. Phil has co-written a number of scripts with director Peter Hewitt (Bill and Ted’s Bogus Journey, The Borrowers, Garfield) for production companies in Europe and the US. Phil is also an experienced script editor for film and TV.

Phil and Ted Wilkes (also speaking at LSF 2020) are currently in the process of writing their first joint book outlining their unique take on the process of structuring a story. The Beginning, The Middle & The End will be available soon where all good books are stocked.

Philip Hughes is appearing at the following sessions:

Authors of narrative structure manual “The Beginning, the Middle and the End”, and Regents University screenwriting lecturers Phil Hughes and Ted Wilkes are passionate and relentless in the pursuit of excellent storytelling.