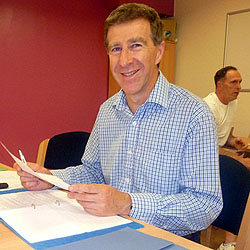 As producer Philip has worked on a 2 hour comedy film also for Carlton/ITV, Margery & Gladys, starring Penelope Keith and June Brown, broadcast to an audience of 7.4m.in September 2003; Making Waves, a 6 x 1 hour series for Carlton ITV; and he produced First Sign of Madness, a series of four monologues for Carlton, which starred Pam Ferris, James Bolam, Emma Chambers and Martin Hancock, and won awards at the New York TV Festival, Worldfest Houston, and the Columbus Ohio TV festival in 2001.

Philip was Head of Development for Drama at Carlton TV for 5 Years. As well as initiating and script editing Anybody’s Nightmare, a 2 hour film for ITV starring Patricia Routledge, he worked as a script editor on numerous shows including the last two Inspector Morse films, The Wench is Dead and The Remorseful Day; Kavanagh QC, Plain Jane (written by Lucy Gannon), Cider with Rosie, Noah’s Ark and The Waiting Time.

As an independent producer, he has several projects in active development.

I would encourage screenwriters living in the States to fly over the Atlantic for the LSF. Make a week of it!"