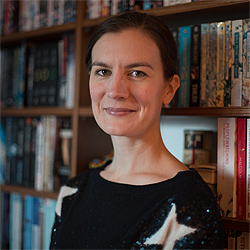 Having signed with Independent Talent in 2017, Rachel started writing for Casualty in 2018 and has just finished her fifth episode as a core writer. She has several original projects in development, and is attached as an episode writer to various others. Prior to screenwriting, Rachel worked all over the world in production and international development. Rachel is represented by Jago Irwin @ITG_Ltd.

Rachel Paterson is appearing at the following sessions: