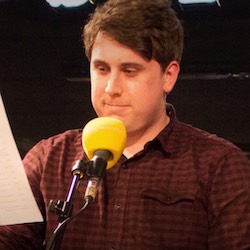 Robbie is a sketch, sitcom and topical joke writer who has written for the BBC New Comedy Show, Breaking the News and podcasts “The Comedy Geek Sketch Podcast”, “The Wireless Show”, “Sketch Please!” and “Idiot Wind”. His short form comedy/horror script “The Contraption” forms part of the portmanteau feature film “The Haunted Hotel” available on Amazon Prime. Robbie’s sitcoms feature topics he is passionate about, such as football, Greek mythology and mental health, with fragile, quirky characters trying to shape the world in their bizarre image. His sitcom “Bobby Chambrake’s Soccer Skillz” was longlisted for the Short Com Sitcom competition.

Robbie Sunderland is appearing at the following sessions: