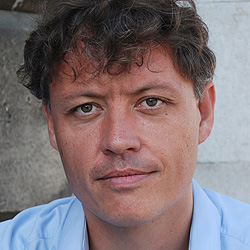 Robert Thorogood is the creator of BBC1’s Death in Paradise. The third series was watched by an average of 8.5 million people per week, the fourth series has just finished filming and Robert’s currently preparing for the fifth series, which will be shooting in 2015.

Before this though, he spent 15 years working as a script reader and temp secretary while he tried to get his first broadcast credit. In that time, he managed to sell a number of treatments to various indie production companies and was, at various times, commissioned to write three different original scripts for the BBC and ITV. However, by 2010 (when Death in Paradise was greenlit), the only script that Robert had actually had broadcast was a one-off afternoon play for BBC Radio 4, Beyond Abstraction (a fantasy about the mathematician Paul Wolfskehl).

Robert’s breakthrough came because he entered the Red Planet Prize in 2008 (set up by Tony Jordan, creator of Hustle, Life on Mars, etc.), and was chosen as a finalist, which gave him the opportunity pitch Death in Paradise to Tony.

Robert has written 10 of the 24 hours of Death in Paradise broadcast so far.