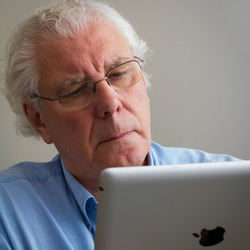 Robin Lyons is the Managing Director of Calon, in Cardiff. He has had a career as an actor, writer and jazz critic, but for over thirty years has been writing and producing animation for film and television.  His credits include the BAFTA winning SuperTed and Hilltop Hospital, and the multi-award winning Hana’s Helpline.  He has produced over a dozen internationally distributed television series and (with Andrew Offiler) written  more than 300 animation scripts.

His feature film credits include The Princess And The Goblin, (Writer/Producer), the animated film of Under Milk Wood (Producer) which uses the Richard Burton radio recording, Captain Morten and the Spider Queen (Producer), Asterix in Amerika and Little Hippo (writer with Andrew Offiler).

He has recently produced an animated series, Sali Mali, Made entirely by artists working at home during lockdown.

He is a founder member of the Wales Animation Movement, a visiting lecturer at the Catholic University in Milan, and Visiting Professor at the University of South Wales.

Calon TV is interested in animated projects of all shapes and sizes. Anything we couldn’t possibly think of ourselves.