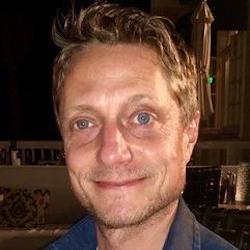 Rowan Joffe is a multi award winning writer and director, whose directorial debut, Secret Life, was hailed as ‘a masterpiece’ by critics at both The Times and The Guardian newspapers.

His second directing project, The Shooting of Thomas Hurndall, won Rowan a BAFTA Award for Best Fiction Director 2009, as well as a host of award nominations, including nominations for Best Single Drama at both the BAFTAs and the RTS Awards.

In 2009, Rowan wrote and began directing his film adaptation of Graham Greene’s classic novel, Brighton Rock, for Optimum Films, which was released in 2011. Rowan also wrote and directed Before I Go to Sleep, adapted from the hit novel by SJ Watson, which starred Nicole Kidman, Colin Firth and Mark Strong and was released in 2014.

Rowan’s highly acclaimed and award nominated original television show Tin Star, starring Tim Roth and Christina Hendricks, was the most successful show on Sky Atlantic in 2017 and has since broadcast on Channel 4. The second season aired on Sky Atlantic in January 2019 and the third series aired in late 2020.

Rowan currently has several new projects in development for FIlm & TV including; Ballad Of A Smaller Player with Good Chaos, Martin Beck with Endeavor Content, Aphra Behn with Cuba Pictures, Simon Riske with eOne and Two Men with Gaumont.

Rowan Joffe is appearing at the following sessions:

We often use phrases like ‘truth bombs’ or ‘lightbulb moments’. Well, this session is going to be that, but in rapid succession, covering the art and craft of screenwriting and the business.