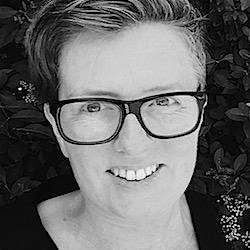 Sally Abbott created the award-winning original BBC drama THE CORONER which ran for two series on BBC1 and is shown all over the world. Sally has recently written her second episode of VERA for Silverprint Pictures/ITV. Last year, her play I THINK WE ARE ALONE was co-directed by Kathy Burke and Scott Graham for Frantic Assembly as their 25th Anniversary. It was mid-way through a sold-out run at Theatre Royal Stratford East and about to go on a national tour when it was cancelled due to the pandemic.

Sally’s TV credits include VERA, DEATH IN PARADISE, HOLBY, EASTENDERS and CASUALTY where one of her episodes was nominated for a Radio Times/CDN Award. In 2017 Sally co-wrote the stage monologue BOROUGH MARKET, ONE SATURDAY with Michael Begley which won the TCN Monologue Slam.  Sally’s original tv projects are in development with STV, Blackbox Media, Lime Productions, Playground Entertainment, Tall Story Pictures, ITV, Acorn and Leopard Pictures.

Sally grew up in the West Country and worked in theatre for 17 years including as associate producer, director and dramaturg for Manchester Contact Theatre, English Touring Theatre, National Association of Youth Theatres and Liverpool’s Everyman Theatre. She trained on the prestigious BBC Drama Writers Academy.

Sally Abbott is appearing at the following sessions:

Writing For The Long Haul: Television For Years with Sally Abbott

How can you design your show now to build long-term success? Sally’s here to show you how.