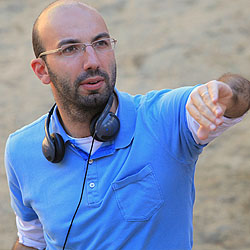 Sam is the creator, co-writer (with Tom Basden) and director of Plebs: ITV2’s hit comedy show, the fourth series of which aired earlier this year.  Sam and Tom will also write the pilot episode for the US version for Amazon, which Seth Rogen and Evan Goldberg’s company Point Grey will produce with Rise Films. Plebs is ITV2’s most successful comedy ever. It picked up Best Scripted Programme at the Broadcast Digital Awards, Best New Comedy at the British Comedy Awards and Best Scripted Comedy at the RTS Awards in 2014. Sam’s previous credits as director include How Not to Live Your Life (BBC3), Stuck (a single comedy two-hander), innovative online comedy series Where are the Joneses? (starring Emma Fryer & Neil Edmond) and short film Honeymoon Suite (starring Tim Key & Lola Zidi as a couple on the first night of their arranged marriage). He also created and co-wrote (with Tom Basden) BBC3 pilot Brave Young Men, produced by Baby Cow and starring Tom Basden and Marc Wootton, and has written episodes of shows such as Kudos/ITV’s Moving Wallpaper and Eleven Film/E4’s Gap Year.

With his brother Teddy, Sam runs Rise Comedy, a UK production company (the production company behind Plebs). Sam has also developed a romantic comedy feature with Rise Films/Endor/BFI, and is currently developing a comedy animation series for CBS, with James Corden and Ben Turner.

The Actors' Table Read was so illuminating – seeing what happens to your script when it is handed over to a director and actors was a complete eye-opener."