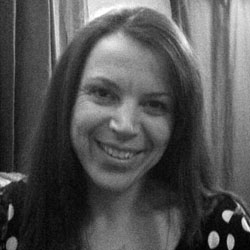 Sarah completed her MA in TV and Radio Scriptwriting at the University of Salford in 2014. During this time she got her first professional broadcasting credit on BBC Radio 4 Extra satirical show Newsjack. She also wrote a 60 minute Christmas play A Wythenshawe Tale for WFM 97.2 which  has been broadcast over the festive season in since 2013.

Sarah wrote her first stage play Bleeding with Mother a dark comedy which was produced at various Manchester fringe venues in May 2016, and at the home of northern fringe theatre The King’s Arms, Salford. Bleeding with Mother was published shortly after the production run in June 2016. Sarah took part in ‘Oh Dear Diary Manchester’ which saw her debut stage performance by reading cringe worthy extracts from her teenage diaries for The Greater Manchester Fringe Festival.

In September 2016, Sarah staged a rehearsed reading for her new radio play Breakdown Recovery as part of Studio Salford Development Week. Sarah is also part of a small team of writers who created and write ALLFM 96.9 Manchester community radio soap Station Road which is broadcast three times a week on the air and online.

Sarah was selected to take part in the first London Screenwriters Festival Talent Campus. This involved intensive development on a feature script with an industry partner. Sarah continues to develop her writing craft in radio and theatre in 2016 and from the experience gained on Bleeding with Mother has plans to carry on producing her own work.