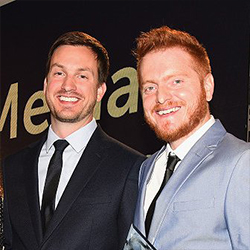 FILMMAKERS SCOTT BECK & BRYAN WOODS first met as sixth-graders in their hometown of Bettendorf, Iowa. After discovering a shared interest in cinema, the duo began collaborating on stop-motion movies with their Star Wars action figures.

Beck & Woods most recently wrote the screenplay for A QUIET PLACE, which was released to critical acclaim and has grossed over $340 million worldwide. The film was produced by Paramount Pictures and stars Emily Blunt and John Krasinski, who also directed. Beck & Woods additionally served as executive producers with Michael Bay and his Platinum Dunes banner.

A QUIET PLACE was named as a Top Ten Film of 2018 by the American Film Institute and the National Board of Review. Beck & Woods’ script earned them the Saturn Award for Best Writing, alongside nominations from the Writers Guild and the Critics Choice Awards, and was named one of the year’s ten best scripts by The Tracking Board Hit List. On the heels of the script’s sale, Paramount signed Beck & Woods to a blind deal for a project they will write and direct for the studio.

The duo also wrote and directed the thriller HAUNT for producer Eli Roth, Sierra/Affinity, Broken Road Productions, and Nickel City Pictures. The film received acclaim from numerous outlets including the Los Angeles Times, The Hollywood Reporter, Parade Magazine, and the Chicago Sun-Times, which called HAUNT “stylish and creative… a quite grisly horror gem.”

Recently, Sony Pictures picked up the UNTITLED BECK/WOODS SCI-FI THRILLER which Beck & Woods will write, direct, and produce, alongside producer Sam Raimi. The exact logline for the film is being kept under wraps.

Beck & Woods were named by Variety on their annual “10 Screenwriters to Watch” list, and they are recipients of the Writers Guild of America Evan Somers Memorial Award for distinction in writing characters with disabilities (A QUIET PLACE).

As teenagers, Beck & Woods were shortlisted as two of the top 50 directors (out of 2,000 applicants) for Ben Affleck & Matt Damon’s PROJECT GREENLIGHT series on Bravo. While still in college, Beck & Woods’ work caught the eye of MTV Films, which offered the pair a feature film development deal. The duo went on to write and direct an original scripted pilot for MTV and executive producer David Gale (ELECTION) and were later listed as “The Top 100 Writers on the Verge” by Tracking-Board.com.

Scott Beck & Bryan Woods is appearing at the following sessions:

“A Quiet Place” was a sensation, blowing audience minds around the world. With an irresistible premise that both exploits and subverts expectations, writers Scott Beck and Bryan Woods are with us to discuss how they did it, and what’s next.