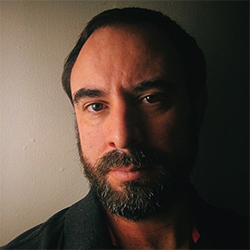 Sean Robert Daniels is a screenwriter, head writer, script editor, story consultant, and senior lecturer. In 2012 he won the Academy Nicholl Fellowship in Screenwriting, becoming the first South African to do so.

When he was ten years old he was chased by a hippopotamus, peed on by a tiger, spat on by a cobra, and run over by a donkey cart. Not at the same time, of course, but a rough year all around – one he believes prepared him for the life of a professional screenwriter.

Since then he’s had five of his feature films produced, storylined almost two hundred soap opera episodes, and been the head writer on an award winning crime procedural.

In 2016 he co-founded The Writers Block – a script and story consultation company, that also offers writers room workshops and training.

In 2018 he emigrated to the UK, taking up a senior lecturing post in screenwriting at the University of West England. He lives in Wales with his wife Kate – a wool wrangler, screenwriter, and script editor.

Sean Robert Daniels is appearing at the following sessions:

7:00pm Screenwriting Competitions: How to Navigate Them

Who Knows Anything? The Many Shades of Subtext and Power in Dialogue with Sean Robert Daniels

Nicholl Award Winner and inspiring instructor Sean Robert Daniels returns to the LSF to guide you on the dialogue journey.

Come and talk to him about how you can leverage competition wins to build your career, and ask him about making it in movies outside Hollywood.