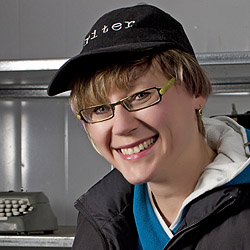 Signe Olynyk is President/CEO of Protagonist Pictures Inc. in Los Angeles, and Twilight Pictures, Inc. in Canada. She has associate produced two feature films, as well as written/produced several documentaries, one hour specials, tv pilots, and a six part series.

Her work has been seen on the CBC, Discovery Channel, FOX, the BBC, and she has professional credits on more than 120 productions.

Signe created and founded the Great American PitchFest and the Great Canadian PitchFest as a way to help other writers meet the people they need to know for their careers to move forward. As a direct result, more than 70 writers have had their scripts optioned, been hired for writing assignments, or been signed with agents or managers. The PitchFest has also allowed Signe to develop relationship with more than 700 industry executives around the world, and she routinely partners new writers with these companies and agencies for representation and script development.