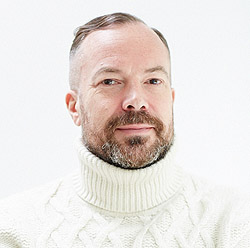 Having directed 9 feature films and 2 anthology films, Simon Rumley is one of the most successful and prolific UK directors of his generation.

With the release of his most recent feature, Crowhurst, Screen International concluded: ‘It reaffirms Rumley’s position among the most interesting, unconventional British filmmakers of the moment.’ Empire Magazine described him as ‘One of the most important and intelligent British film-makers working today.’

His films have played at festivals around the world including Toronto, Rotterdam, SXSW, Sarajevo, Tallin, Transilvania, Buenos Aires, Sydney, London and Stockholm. His films have won almost 50 awards collectively including best films at Sitges, Fantastic Fest and Fantasia and Studio Canal, Netflix, eOne, Magnolia and IFC are amongst the many distributors who have worked on his films.

He is currently in post-production on a historical gangster epic: Once Upon A Time In London.

The best-run, best-organised and best-attended writers' fest I've ever seen..."