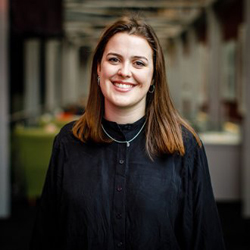 Sorcha Bacon is a BAFTA nominated producer and founder of Try Hard Films, a company that champions marginalised voices which aren’t often seen on screen. Her latest short film “Wren Boys,” commissioned as part of the 2017 Film London Slate, has been both BAFTA & BIFA nominated, won the Oscar qualifying Galway Film Festival and has screened in competition at festivals including Sundance, BFI London and SXSW. In 2018 Sorcha was named as one of six LGBT filmmakers to be given mentorship in partnership with BAFTA. She is currently being mentored by Olivier Kaempfer of Parkville Pictures. Later this year, Sorcha will be taking part in the 2018 DepicT! Jury as part of Encounters Film Festival on behalf of BAFTA. Sorcha is building her feature slate working with writer/directors including Stella Scott & Sarah Clift as well as developing a new short documentary with director Jade Jackman in conjunction with Lush Films.