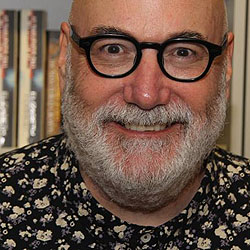 His other screenplays include ghost story The Awakening (2011) starring Rebecca Hall and Dominic West, Ken Russell’s extravaganza Gothic, and William Friedkin’s The Guardian, as well as the ITV mini-series Midwinter of the Spirit starring Anna Maxwell Martin and David Threlfall.

His stage plays include The Chapel of Unrest at The Bush Theatre starring Jim Broadbent and Reece Shearsmith, and he has also published three collections of short stories; Dark Corners, the British Fantasy Award-winning Monsters in the Heart, and The Parts We Play. Comprising of the two novellas Whitstable and Leytonstone and the short novel Netherwood, The Dark Masters Trilogy will be published in an exclusive limited edition by PS Publishing in October 2018