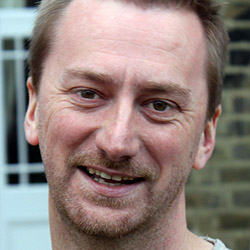 Stewart is open to hearing most ideas although less keen on straight horror.

Stewart le Maréchal is a BAFTA winning producer and Head of Met Film Production, where he oversees and produces a diverse slate of fiction and documentary films for theatrical release. His most recent fiction film, The Infidel, was released in over 40 territories worldwide and starred Omid Djalili and Richard Schiff. Prior to that Stewart produced French Film starring Hugh Bonneville and Eric Cantona and co-produced Little Ashes, directed by Paul Morrison and starring Robert Pattinson He was also the associate producer on Paul Morrison’s Wondrous Oblivion. Stewart has co-produced feature documentaries including Heavy Load, Deep Water with Pathé, Film4 and the UKFC, Men Who Swim for BBC, Donor Unknown and Town Of Runners. He is an executive producer on Sarah Gavron’s documentary, Village At The End Of The World and Jeanie Finlay’s The Great Hip Hop Hoax, both being released in 2013. Stewart produced Esther May Campbell’s short film, September, which won the Best Short Film BAFTA in 2009. He has produced and executive produced several other short films. Stewart is a member of the ACE producers network and BAFTA and in 2012 completed the Inside Pictures programme.  His is also a board director of Hi8us South.

A: Keep the pitch focused and be confident about your material.