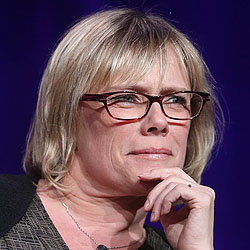 Sue began her producing career at Tiger Aspect in 1991 with Mr Bean. She went on to produce Emmy® Award-winner The Vicar of Dibley, Hospital (which was the opening night comedy for Channel 5 and a winner at Banff), and The Last Englishman which was a Bafta-nominated single drama starring Jim Broadbent. She then had an idea for a flat share between a gay man and a straight girl, got Jonathan Harvey on board and created Gimme, Gimme, Gimme, which was frequently top of the BBC Two ratings.

In 1998 Sue left Tiger Aspect to produce Comic Relief, and then joined Hartswood Films. She also produced all four series of the very popular Coupling which was created and written by Steven Moffat, her husband. Sue has produced several more comedies – Fear, Stress and Anger, Carrie and Barry, The Savages, Supernova and The Cup. She is the Series Producer for the multi-award winning hit drama Sherlock for BBC One co-created by Steven Moffat and Mark Gatiss.

Sue is on the PACT Council and is also a Board member of the National Film and Television School.

Sue Vertue is appearing at the following sessions: