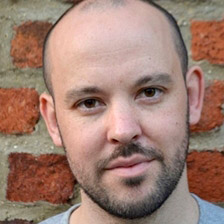 Tim is the editor of the Daily Mash, the UK’s most popular original satire website, and lead writer of the hit BBC2 topical show The Mash Report.

A former BBC journalist, Tim also co-wrote the script for 2017’s Eurovision Song Contest in Kiev. He has TV projects in development with Anonymous Content (US) and Avalon.

Other TV and radio writing credits include 10 O’Clock Live (C4), Listen Against (R4) and A Different Breed (Sky One) and script commissions for Roseanne/Cosby Show producer Caryn Mandabach. He also wrote the animated short film The Yowie and the Magpie which was nominated for the McLaren Animation Award.

He has appeared as a guest at Hay Festival, Edinburgh Festival of Politics and on various  BBC Radio series.