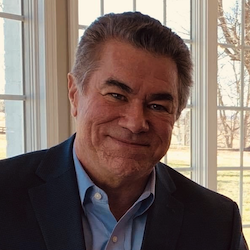 Tom Lockridge is the co-founder and President of Lucky Day Studios, a production company in Kentucky, USA. Lucky Day Studios is dedicated to producing successful, highly marketable, feature films and television for domestic and international release. Tom has been involved in all aspects of the three feature films produced by the company from development, to writing, to pre-production, to casting, to production and post-production.

Lockridge was a writer/producer on the company’s first production which was sold as a Lionsgate release. Unrequited, stars Michael Welch (the Twilight movies and Z Nation), Sarah Habel (Riverdale) and David Keith (An Officer and a Gentleman). It is the story of a messed-up teen who kidnaps his former girlfriend and holds her hostage trying to win her back.

Tom filled the same roles on the feature film Faith, Love, and Chocolate, writing and producing the film that was featured on Pure Flix and is available on Amazon Prime. Rebeca Robles starred in that faith-friendly, coming of age film.

Most recently, Tom wrote and produced Midway to Love as Lucky Day Studios partnered with American Cinema International for the Hallmark Movies and Mysteries Original. The film stars Rachel Hendrix (October Baby) and premiered to a large audience then had several encore broadcasts, and can be found on the Hallmark Movies Now streaming service. Midway to Love was also released for television in France, Spain, Italy, the Middle East, and Canada.

Tom was one of the writers of the screenplay, The Miracle Five, which was recognized as a semi-finalist in the Final Draft Big Break screenwriting competition. A 1984 graduate of the University of Kentucky College of Law, Tom Lockridge has been a successful attorney for over 35 years.

BlueCat's experience with sponsoring LSF was a walk in the park. We received great exposure and our brand was greatly enhanced by our association with such a top-flight organisation."