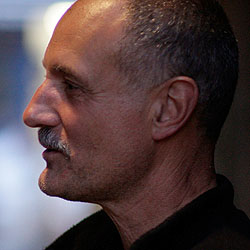 Tony Grisoni worked in many different areas of film making before turning to screenwriting. Queen of Hearts (1989) directed by Jon Amiel was his award winning first feature.

He has worked closely with a number of other directors including Michael Winterbottom (In This World, Golden Bear at the 2002 Berlinale), John Boorman, Julian Jarrold, James Marsh, Anand Tucker, Sean Durkin and Terry Gilliam (Fear & Loathing in Las Vegas, Tideland and The Man Who Killed Don Quixote, the unfinished film project).

LSF is a haven for meeting other writers and getting useful insight from established peers."