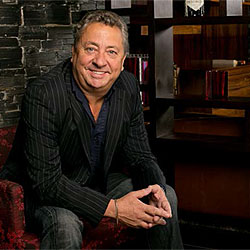 ‘LondonSWF is the premier event for writers in the UK. It has a very clear brief to inspire, educate and connect and is a place where, as writers we can come together to share our experiences and offer support to each other. I’m proud to be a patron of the LSF and look forward to supporting the next generation of British screenwriters.’

Tony started his writing career at the age of 32 when he submitted his first unsolicited script to the BBC. He became a scriptwriter for BBC One‘s EastEnders, writing almost two hundred episodes. He became lead writer and series consultant in the series’ heyday when it constantly hit audiences in excess of 20 million. During this time, Tony was not only responsible for some of the most successful storylines in the show’s history, he also created many of its most well-loved characters including the Slater family and Alfie Moon. His contribution to ongoing drama resulted in being presented with the Special Achievement award at the 2007 British Soap Awards.

As his career progressed, Tony went on to write on such legendary shows as Minder, Boon and Eldorado and later gained additional writing credits on Thieftakers, The Vanishing Man starring Neil Morrissey, and Can’t Buy Me Love with Martin Kemp and Michelle Collins.

He has since become synonymous with successful prime time drama, having created some of the best-loved series in recent years. The creation of the hit drama Hustle starring Robert Vaughn, Adrian Lester and Marc Warren saw the start of a long-running and successful relationship with Kudos. A glossy, entertaining drama following the fortunes of a group of expert con artists let loose on the streets of London, Hustle became a huge global hit and gained nominations for two primetime Emmys, a BAFTA and two RTS awards.

Tony co-created the multiple award-winning Life on Mars, starring John Simm and Philip Glenister. A huge hit with both critics and audiences alike, Life on Mars saw a modern-day cop thrust back to 1973 after a car crash where he was forced to tackle the totally un-PC world of seventies’ policing.

He set up Red Planet Pictures in 2005 as a uniquely writer-led, creatively inspiring drama house, which was conceived to make popular intelligent drama – the type of shows that cemented Tony’s reputation as series creator and show runner. The company initially launched with regional offices in Bedfordshire and Wales (now also London), and won its first commission with Holby Blue – a drama following the lives and loves of the officers based at Holby South Police Station and sister show to BBC One’s hugely popular long-running series Casualty and Holby City. Holby Blue was recommissioned for a second and final series with an extended run of twelve episodes.

Jordan went on to create the ambitious linked dramas Echo Beach and Moving Wallpaper for ITV1, which transmitted in January 2008. Moving Wallpaper was a twelve-episode comedy drama starring Ben Miller and Hugo Speer, going behind the scenes of soap opera, Echo Beach. Echo Beach starred Jason Donovan and Martine McCutcheon and followed the finished soap opera that viewers saw being made during its sister series.

Moving Wallpaper was recommissioned for a second series but was this time based around the production of a zombie show, Renaissance, which was released online via ITV.com and starred Kelly Brook.

The Red Planet Prize was launched in 2007 in order to nurture aspiring writers and to find new writing talent to join Red Planet Pictures’ already impressive stable – something that Tony himself is very passionate about.

Red Planet’s first series for BBC One Wales, Crash, created by Tony, hit the screens in September 2009 for an initial run of six episodes, with a further six broadcast in early 2010. The series followed a group of four young doctors starting their careers at Cardiff City Hospital and facing the steepest learning curve of their lives. Written by a team of new television writers and led by Tony, the series was also broadcast on the BBC High Definition Channel.

Tony also spearheaded the company’s move into factual and comedy programming when Red Planet Pictures and Shine Television joined forces to make History Cold Case for BBC Two, billed as ‘Time Team for dead bodies’. Each hour-long episode focussed on an exhumed corpse from a different era of British history, showing what it would have looked like and the sort of life the person would have led. It launched as a 4 x 60-minute series in May 2010 and returned for a second series. Red Planet currently have several other exciting factual and entertainment shows in development.

Tony’s retelling of The Nativity unfolded over four consecutive nights on BBC One during Christmas 2010 and was told through the lives of the people caught up in the miraculous events. The Nativity received critical acclaim and secured an impressive 5.8 million viewers. This success led to the BBC commissioning Tony to bring Noah to life in 2014.

Death In Paradise, created by Robert Thorogood (discovered through the Red Planet Prize), launched on BBC One in 2012. A Caribbean-set murder mystery show, initially starring Ben Miller and broadcast on the BBC and FTV, it proved a huge success, selling to over 140 territories and becoming the highest rated midweek drama for many years. It is currently shooting its tenth series, which Tony executive produces.

Tony continued to innovate by creating, with a team of writers, the eagerly awaited and unique crime show By Any Means, which was broadcast on BBC 1. Following this, he still found time to write two huge projects: the BBC’s flagship First World War centenary drama, and Dickensian – a unique take on the world and characters of Charles Dickens, which aired in 2014 and 2015.

As well as running his now busy and expanding production company, Tony has a raft of other projects in development.