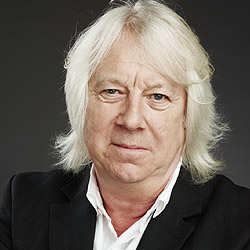 Tony McHale was born in Bradford and educated at Hanson Grammar School, before going to the Rose Bruford College of Speech and Drama.  In the early stages of his career he worked extensively as an actor in theatre appearing at various theatres including Birmingham Rep, the Belgrade Coventry, Chester Gateway, Chesterfield Civic Theatre and Windsor Theatre Royal.

His film appearances varied from A Bridge Too Far to That’ll Be The Day to The People That Time Forgot.  On television he appeared in a wide range of shows such as The Liver Birds, Terry and June, The Cost Of Loving, Game For A Laugh and Beadle’s About.  The high point of his acting career was killing his own career by murdering Ernie Bishop in Coronation Street.  During this period he developed his skills as a writer and director.  As a stage director his diverse credits range from On Golden Pound, to Laburnum Grove, to Bent, to Chekhov’s Three Sisters – which was performed in drag, to musicals as varied as Skool’ Kool to Salad Days to Cabaret.

He has worked constantly as a radio drama writer and his work includes Still Life [which was also later adapted for the stage] and the award winning No Get Out Clause, Get It Off Your Chest, Son From Soho andOverheard.

But over the last thirty years he has become renowned for his work in television, primarily as a writer, but also as a director and producer with literally hundreds of hours of screen credits to his name.

…and his own international award-winning five hour television thriller made by London Films for the BBC – Resort To Murder – which was winner of the Cologne Film and Television Festival.

He was also engaged to co-create and write on the successful BBC hospital drama Holby City and until recently he was the programme’s Executive Producer and Series Consultant and was the recipient of a BAFTA in 2008 – a recognition of the show’s success.

Tony was also involved in the conception and creation of the highly successful Indian drama Jasoos Vijay, a detective series that tackled the problem of HIV and AIDS.

Tony is currently working on a number feature films – Mark Of Cain, Death Of A Dead Man and Kidnap as well as a new stage play The Little Fat Black Pussy Cat and has just recorded a new radio play, Network, for BBC Radio 4, whilst finishing another new radio play Dead In The Water to be recorded for transmission later this year. He also has a number of television projects currently in development for BBC, ITV and SKY.

And then there’s It Happened In Nixon Falls …his own rock comedy thriller musical for the stage, which was showcased in Edinburgh and will be unleashed on the public at large in 2013.

Tony also has his own production company that produces not only film and television projects but also productions for the stage and the Internet. www.sanctuaryfilms.com

Tony lectures all over the world on screen writing, directing and producing.

He is also the proud recipient of an Honorary Fellowship from the Rose Bruford College and an Honorary Doctorate from the University of Bradford.

The speakers were excellent. I had the opportunity to pitch twice, resulting in five producers taking my one-pager."