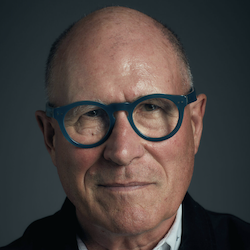 William Nicholson was born in 1948, and grew up in Sussex and Gloucestershire.

He was educated at Downside School and Christ’s College, Cambridge, and then joined BBC Television, where he worked as a documentary film maker. There his ambition to write, directed first into novels, was channeled into television drama. His plays for television include Shadowlands and Life Story, both of which won the BAFTA Best Television Drama award in their year; other award-winners were Sweet As You Are and The March . In 1988 he received the Royal Television Society’s Writer’s Award. His first play, an adaptation of Shadowlands for the stage, was Evening Standard Best Play of 1990, and went on to a Tony Award winning run on Broadway. He was nominated for an Oscar for the screenplay of the film version, which was directed by Richard Attenborough and starred Anthony Hopkins and Debra Winger.

Since then his film credits include: Sarafina, Nell, First Knight, Grey Owl , Gladiator (as co-writer, for which he received a second Oscar nomination),  Elizabeth: the Golden Age, Les Miserables, Mandela: Long Walk to Freedom, Unbroken, and Everest. He has written and directed his own film, Firelight; and four further stage plays, Map of the Heart, Katherine Howard, The Retreat from Moscow  (which ran for five months on Broadway and received three Tony Award nominations), and Crash. In 2017 he wrote the revised book and five new songs for the revival of the South African township musical King Kong, at the Fugard Theatre in Cape Town.

His second film as writer and director, HOPE GAP, was completed in 2018 for release in 2019.

His fantasy novel for older children, The Wind Singer, won the Smarties Prize Gold Award on publication in 2000, and the Blue Peter Book of the Year Award in 2001. Its sequel, Slaves of the Mastery , was published in 2001, and the final volume in the trilogy, Firesong , in 2002. The trilogy has been sold in every major foreign market, from the US to China.

His love-and-sex novel for teens, Rich and Mad, was published in 2010.

He lives in Sussex with his wife, the social historian Virginia Nicholson, and their three children.

William Nicholson is appearing at the following sessions:

LSF Replay - Are You Not Entertained? In Conversation with William Nicholson