In a film world obsessed with structure, there was something refreshingly honest about John Yorke standing up in front of a room full of writers and stating that structure gurus had him seriously worried. So worried, he’d become one.

The irony was not lost on him.

John was working in TV when McKee burst onto the scene in 1999 and divided everyone into two camps. He felt that while patterns certainly exist, what McKee, and Syd Field before him, had discovered was a simplification of a much older, archetypal structure.

John found his answers in the works of Shakespeare, Freytag’s pyramid and Terence (185BC) – the infamous 5 act structure. As he continued, John openly admitted that “none of this will make you a better writer.” I’d posit that actually, it might do…

What I found most interesting about his talk, and what created a healthy debate afterwards, was John’s central question, the question that drove him to write the book – why are all stories so similar? Why does the archetype exist?

Along with a few like-minds before him, John discovered that story structure is driven by a need to make sense of the world around us. As human beings, we cannot perceive randomness; we must impose order. Things happen and we place our belief systems over them to make sense of what is otherwise a series of uselessly unconnected events. Every act of perception is an attempt to impose order, and drama is our way of ordering the universe into a comprehensible form.

So how do we go about creating meaning? Why, in 3 acts of course! “I come across information, I process it, it changes me.”

Or, as Socrates put it, Thesis – Antithesis – Synthesis.

Structure is not arbitrary. It is built into the way that we understand the world, into our DNA. Even those writers, like Charlie Kaufman, who openly hate structure gurus, still structure their stories like this.

All the gurus have done is divide up this archetype into as many different ‘beats’ as they believe necessary. From Field’s 3, to Snyder’s 15, to Truby’s 22, it’s all built on the same ancient foundation. You can use whichever metaphors, words, signs, signifiers and noises that you like, but the roots do not change.

Even Joseph Campbell, the inspiration behind Christopher Vogler, saw structure and just wrapped a myth around it. Different metaphors to explain something we can’t comprehend.

And that of course is the supreme irony: in the same way we force patterns in our own life to make sense of a chaotic world, there is something intangible, magical about story that we can’t understand. And so gather a room full of story-tellers, trying to comprehend the inner-workings of story, so that we might be able to assemble the chaos for others, who in turn are trying to comprehend the incomprehensible.

Like trying to see your own eye, we will always fail.

So why bother? Why did John spend years interviewing English professors up and down the country to write a book about what he believes is the oldest expression of story?
Well, that was part of the debate afterwards, so it only seems fair that we don’t use John’s words. Instead, I’ll turn to those of David Mamet:

“The actor cannot hide his or her objective, neither can the playwright, neither can the film director. If a person’s objective is truly – and you don’t have to do it humbly, because you’ll get humble soon enough – to understand the nature of the medium, that objective will be communicated to the audience. How? Magically. I don’t know how. Because it will. It just can’t be hidden. In addition to what you will or will not learn about the medium through your desire to understand it, that desire itself will manifest.”*

The act of trying to understand the world is more important than understanding it, because giving and creating meaning is what drives the form forward; it is the founding principle of evolution. 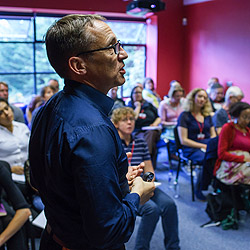 John’s book, Into The Woods, is available on Amazon.

John is running a one day workshop at the London Screenwriters Festival. More HERE.

Tom Kerevan is a London-based screenwriter of films, TV and virals. His feature film ‘Tear Me Apart’ was just premiered // www.tomkerevan.com // @TomKerevan
* From ‘On Directing Film’ by David Mamet.