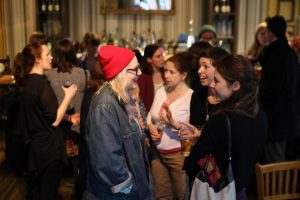 On 19th November, the fourth UnderWire Festival (www.underwirefestival.com) begins at The Yard in Hackney Wick. Founded by Gemma Mitchell and I in 2010, UnderWire is the only short film festival that recognises achievement across the various creative disciplines of filmmaking, with awards for Producing, Editing, Cinematography, Sound Design, Composing, Acting, Film Journalism, Directing, and of course Screenwriting. On each night of the festival all of the shortlisted films in each category are shown, together with events that have a practical industry focus. Designed by filmmakers for filmmakers, the goal of UnderWire has always been to improve the quality of the British film industry from the inside out.  As women are under-represented in almost every area of filmmaking, the festival celebrates female filmmakers’ achievements and nurtures the extraordinary talents that are too often overlooked.

Gemma Mitchell’s co-directors have worked with furious dedication over the past years, taking outreach projects across the country to connect with filmmakers outside of London and contributing to major festivals across the UK.  The events at this year’s festival demonstrate the enormous progress that has been made in getting the industry to recognise how vital it is that women’s contributions to film are given a platform, with sessions from BAFTA , BEV, the Royal Central School of Speech and Drama and Little White Lies.  Gemma and Helen Jack (formerly of Shooting People) formed a Dream Team in 2011 and 2012, and this year UnderWire is in the hands of Chloe Trayner – a driven and determined woman who has produced this year’s festival alongside her role at the London Film Festival.

While my involvement over the past two years has been negligible, after making the difficult choice to focus on my own writing, I am enormously proud to be bringing a stronger Euroscript involvement to this year’s festival.  2013 saw the first UnderWire & Euroscript Screenwriting Competition, for a short film script. The winning script by Catherine Wignall is astonishingly beautiful, and the prize of a table-read session, directed by previous winning Director Becky Coley with a cast of actors from the Royal Central School of Speech and Drama is going to be a highlight for me. http://www.underwirefestival.com/event/directing-actors-in-partnership-with-the-central-school-of-speech-and-drama-and-euroscript/

Euroscript’s signature “Script Clinic” which last appeared at the London Screenwriters Festival will also be taking place on the morning of Saturday 23rd November, with mini half-hour sessions and only 9 one-to-one appointments available (instead of our mammoth run of 100) for those quick enough to snap them up. http://www.underwirefestival.com/event/the-story-and-script-clinic-with-euroscript/

Naturally, as sponsor of the Screenwriting category, Euroscript also has the privilege of naming the winner of each year’s award. Submissions have been incredible this year, and it is an exhilarating experience to reward talent, even if picking just one winner becomes increasingly difficult.  The programme showing on Thursday 21st is truly breathtaking in scope, and inspiring to watch: I would urge anyone interested in the future of British Screenwriting to indulge in this wonderful compilation of film. http://www.underwirefestival.com/event/dream-drafters/

I also have a special affection for the category that kicks UnderWire off every year, and is unique to this festival. The XX Award addresses the representations of women onscreen and is open to filmmakers of any gender. The question of what makes a “strong” female character is often up for discussion, and the wonderful array of examples that are selected for this category each year are nothing short of life-affirming, serving as filmic disinfectant for the over-sexualised stereotypes the media thrusts in front of our eyes all year round! http://www.underwirefestival.com/event/xx-award/

Whole Festival passes are available for just £50 and aside from the opportunity to see some of the best short films you will ever see, sessions on crowd-funding, directing actors, devising a festival strategy for your film, and making the leap from short film to features are taking place. FULL SCHEDULE http://www.underwirefestival.com/2013festival/

UnderWire is a non-profit operation, entirely run on the goodwill of the team and our incredible supporters, most notably those who have been enabling the festival to run from its very first year: the astonishingly generous post production house VET, Women in Film and Television and Euroscript.  Without the invaluable support from these and all our partner organisations it would be impossible to run such a mammoth operation, and all the filmmakers who have benefited from UnderWire remain hugely grateful.