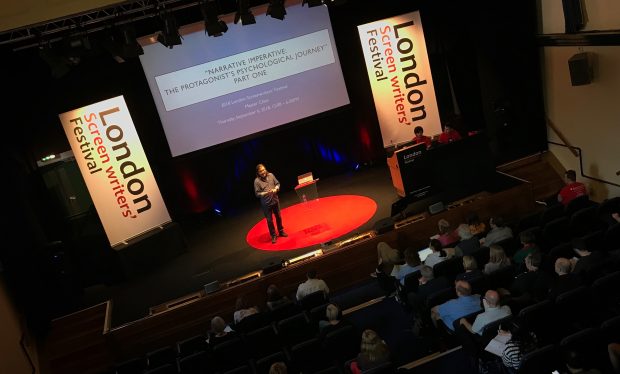 A new week has dawned, and what better way to kick it off than with some grade A script theory.

My third report from the London Screenwriters’ Festival covers a seminar with script guru SCOTT MYERS on ‘THEME: What It Is, How to Find It, and How to Use It to Enrich Your Story’.

I have sat/read through my fair share of script theories, rule sets, story templates and character archetypes, and went into this one a tired cynic. But it is fair to say that Scott reawakened me to the benefits of generalised story theory. His laid-back American charm, combined with his playful creative energy, made him instantly engaging. His caveat that his advice was not for every story, and more geared towards writers seeking mainstream Hollywood audiences, took away the salesman edge you often get with such remedial sessions. And his considered, psychological approach to story structuring made his ideas feel rooted to the human experience and potent with possibility. If any of this sounds interesting to you I strongly advise you get a fuller picture by visiting his blog – https://gointothestory.blcklst.com/

From me though, you will just get these five gleaming nuggets.

1) We all know it’s important, but what is Theme? For Scott, Theme is MEANING. While a plot line will tell us what a story is about, a theme line will tell us what a story MEANS. Hence, your theme is a touchstone for the creative process of telling your story, something you judge each scene and interaction by. It could just be one word (as practised by Francis Ford Coppola) or it could be a line (Ed Neuimer stated that for ‘Starship Troopers’ the theme was ‘war makes fascists of us all’). It can often end up as a key line of dialogue. But done right, Theme is felt by the reader (rather than thought about) and it expands a story, making the sum greater than the parts.

2) How do you find the Theme? You follow your PROTAGONIST on their journey. A protagonist should undergo the biggest metamorphosis of any other character in your world, be in some way linked to every other character within it, and their goal should dictate the story’s end point. They are the fulcrum of your world, and what happens to them dictates the meaning of your story, and hence the theme.

3) A story’s central theme can be put alongside smaller variations of itself (sub-themes) or seemingly distinct themes that actually end up giving the central theme new meaning (adjunct themes) by offering the audience new ways of seeing and understanding it. For example in ‘Tootsie’, the central theme is that Michael is a better man as a woman, than he is as just a man. Sub-themes of this are ‘Sexism’ and ‘Honesty’. Adjunct themes are ‘Acting’ and ‘Friendship’.

4) Film is a visual medium, and theme can often be manifest as a psychical object – as a talisman – a possession that conveys meaning. Examples are the moths of ‘The Silence of the Lambs’, Wilson the basketball in ‘Castaway’, the wife’s handkerchief in ‘Braveheart’, and the two-headed coin in ‘The Dark Knight’ (which even has its own character arc!).

5) Theme can also be conveyed through motif – a repeated line of dialogue or gesture (Ed crossing his heart in remembrance of his wife in ‘Up’) or song (‘The Show’ sang by the protagonist’s daughter in ‘Moneyball’, the lyrics of which contain an amazing synchronisation with the protagonist’s own mindset and psychological journey).

That’s it from Scott. Wednesday will be reserved for the mid-month Script Pitch round up, but on Friday I’ll post a report on a panel discussion about writing for radio, a medium that gives more opportunities to new writers than any other. You’d be silly to miss it.

Get your pass for the festival below…