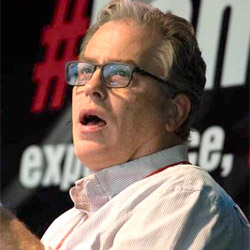 His brilliance for Pixar and beyond is legendary. Whether talking Toy Story 2, Finding Nemo, The Emperor’s New Groove, Late Night with Conan O’Brien, or dozens of other projects, Dave has been part of the London Screenwriters’ Festival family since the very beginning. Now he’s back to discuss his newest project: a new, hilarious adaptation of GARFIELD. Come reacquaint yourself with one of the all-time best and look to his future (and yours). Our conversations with Dave always generate solid gold advice – and this session will be no different.