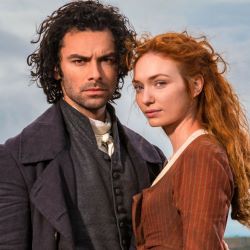 Described by The Telegraph critic Allison Pearson as “devastatingly good”, Poldark is the perfect blend of action, adventure, forbidden romance and intrigue, set against the stunning Cornish coast.

An instant hit when it first screened on BBC One in 2015, the show raked in around six million viewers per week (as well as a further seven million in the US), making it one of the most watched shows in Britain – and boasting more than TWICE the audience of Game of Thrones.

Written with vim, vigour and a modern sensibility, Debbie Horsfield captured the public’s imagination AND maintained its prime time slot. To the distress of its loyal fans, its fifth and final season aired in the summer of 2019, but its legacy endures…

Meet Debbie Horsfield and the team to find out how it was written and produced, why it was such an enormous success and how to keep ratcheting up the drama, season upon season.

If you want to write multi-season historical drama for television, this is an absolutely unmissable session.

Credits include Poldark, Life in Squares, Elizabeth: The Golden Age

Christian is an English actor, best known as the odious vicar Ossie Whitworth in the BBC hit period drama, Poldark.

Icelandic actress Heida won the hearts of audiences worldwide as the ever-dignified Elizabeth in the fraught Poldark love triangle.

Credits include Poldark, Ordeal by Innocence

Karen is an accomplished executive producer who has spent the last six years overseeing Poldark and the Agatha Christies for Mammoth Screen.

Tom is best known for his role as Sam Carne, brother to Demelza Poldark (Eleanor Tomlinson), in the award-winning BBC period drama Poldark.

LSF is now as crucial to the future of the British film industry as the BFI, and due to its global appeal, LSF is making waves around the world."