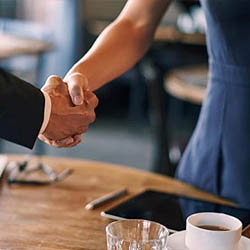 You’ve worked day and night on your pitch. Now, you find yourself in front of a producer and finally have a chance to pitch your script …and they request it! Your work is done, right?

Many writers work tirelessly on perfecting their pitch and take dozens of classes in an effort to perfect their pages. But what happens when the trained writer is thrown into a meeting? This is a prime opportunity to build a relationship but more often than not writers are ill prepared.

Owning the room is one of the most important elements of the business of screenwriting and Joey Tuccio, the CEO of Roadmap Writers, is here to teach this invaluable class focused on tips and techniques to help you immediately stand out. Learn real world tactics to push your career further than you ever thought.

This class will cover:

Roadmap Writers is an educational hub for writers to learn from and connect with executives, agents, and managers. In just two year’s Roadmap Writers has helped 49 writers get signed by agencies and management companies like Circle of Confusion, Gotham Group, Gersh and The Shuman Company.

Roadmap Writers aims to bridge the gap between fresh, talented voices and the industry execs who can make things happen.