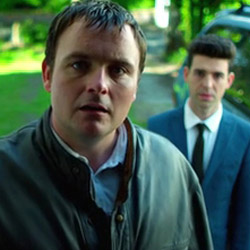 Follow us down the ‘Utopia’ rabbit hole and discover how one of Britain’s most ferociously original TV shows got commissioned and produced.

Joining us on stage at the festival will be the cast, director and writer of ‘Utopia’ for an indepth autopsy that will take us through inception, pitch, writing, production, editing and final audience engagement of the Ch4 smash hit show.

This is your opportunity to get inside the head of creator Dennis Kelly and find out how he managed to get Ch4 to go for a show that is surreal, violent and cryptic.

Adeel is most know for his role as ‘Faisal’ in British comedy Four Lions, and can currently be seen in CH4's Utopia.

Dennis wrote and co-produced his most recent series Utopia and co-wrote the award-winning comedy series Pulling.

Credits include: Utopia, The Devil's Whore

Utopia Director Marc was listed by Broadcast magazine as the No.1 director working in television in their annual Hot 100 edition 2013.

Nathan is best known for starring as Curtis Donovan in the E4 series Misfits and as Ian in C4's Utopia.

The festival has literally transformed my career and given me opportunities I could not have found anywhere else. It's a yearly kick in the creative arse!"