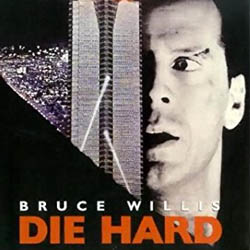 You ask for miracles… Delegates, we give you D-I-E H-A-R-D – the action film that defined the genre!

Come down to Tuke Hall… We’ll get together, have a few laughs… and watch the 1998 smash hit, whilst screenwriter Jeb Stuart talks us through the development and production of this Bruce Willis classic.

Jeb will discuss the choices made during the writing, development, production and editing of the movie, and how those decisions helped to give it the status it holds today.

This is your chance to get to the heart of the process that made this film come to the big screen. Read the script, watch the movie, and dive in to this high-action session, as we welcome Jeb to the party!

Ho-ho-ho-hold on to your hats! It’s going to be explosive!

Credits include: Die Hard, The Fugitive

Jeb has been a motion picture and television screenwriter, director and producer for over 30 years and is considered one of the great action screenwriters in film history.

My head is still spinning after an AMAZING weekend at the LondonSWF. The LSF team truly know how to put on a great gig! Have already signed up for next year!"