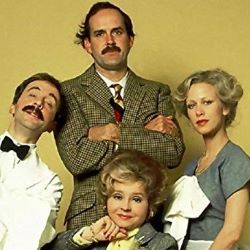 In this cracking session, Karol Griffiths, who has over twenty years’ experience as script editor and development consultant on global smash-hit comedies such as Friends, Roseanne and How I Met Your Mother, will talk you through one of the most popular episodes of the much loved British comedy, Fawlty Towers, sharing her insights into comedy writing and show structure.

When John Cleese and Connie Booth sat down to create Fawlty Towers, they may not have known they were creating the universally acknowledged Best Sitcom of All Time, Bar None, Full Stop. But they did, and it is, and here we are.

Delightfully free of political correctness, bursting with a barely contained spiralling energy, chock full of classic moments – where else can one joyfully discuss goose-stepping, Waldorf salads (“We’re out of Waldorfs!”), moose heads and Barcelona? – Fawlty Towers has never been duplicated or matched.

Download the script, read it, then watch the episode accompanied by live commentary from Karol Griffiths.

It is the single best thing that I've ever done for both my craft and my career."