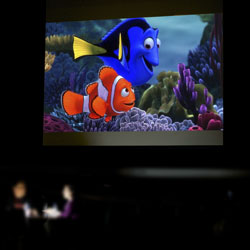 Finding Nemo in this live Script To Screen.

After dinner with Dave in LA earlier this year, it became apparent that this script to screen LIVE with ‘Finding Nemo’ had to happen. His stories were hilarious, inspirational, but most of all, practical. You can expect a session crammed with real world insight into the writing of one of Pixars most iconic of films. If you want to write for children, this will be an unmissable session.

Read the script, then watch the movie at the festival with a live commentary with Dave, discussing the development and execution of the screenplay – it’s our own unofficial DVD ‘chat track’.