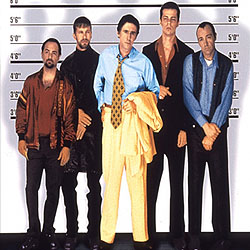 In this candid and extertaining session, Christopher will share his journey as a screenwriter, from the time he exploded onto the scene with The Usual Suspects, through his first directing gigs, the scripts that didn’t get produced, the ones that did… all the way to helming a multi billion dollar franchise.

In his career, Christopher has written spec scripts for love, been hired to write scripts, acted as a script doctor, as a collaborator and adapted novels.

And his CV is ridiculous… Mission: Impossible – Rogue Nation, Edge of Tomorrow, Jack the Giant Slayer, Jack Reacher, Valkyrie, The Way of the Gun and The Usual Suspects are just some of his produced scripts.

Eddie Hamilton is no stranger to great story telling too, his recent credits aside from Mission: Impossible – Rogue Nation include Kick-Ass, Kingsman: The Secret Service and X-Men: First Class.

Expect insight, inspiration and wonderful raconteuring, as well as a rare opportunity to hear from both the Writer/Director of Mission: Impossible – Rogue Nation, but also the Editor.

Credits include: The Usual Suspects, Edge of Tomorrow, The Way of the Gun

Eddie has over twenty features under his belt, including 'Mission: Impossible - Rogue Nation' and ’Kingsman: The Secret Service’.