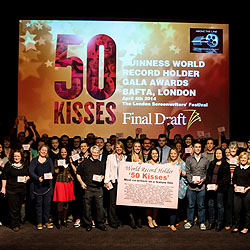 Last year we ran the 50 Kisses initiative which resulted in 51 of our writers getting their first cinema credit AND going into the Guinness Book Of World Records! Collectively and against all odds, we made a feature film that was the second highest grossing UK film in it’s week of release and continues now to play festivals and collect awards.

We learned so much making 50 Kisses and we are taking all that knowledge into a new Create 50 project. We want YOU to write the script for us. We will have a whole new theme (not kisses) and one that we hope will really capture the minds of writers, filmmakers, audiences, distributors, festivals and broadcasters.

Join us for an analysis of how best to write a script for this new initiative and get YOUR project shot and seen.