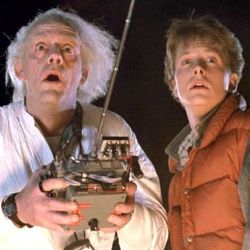 Hollywood is filled with clever, creative people who see what is going on in the scientific sphere, and bring it into the light. That way we can all see what humans are like, where they are headed, and what the consequences – good and bad – might be. So the science behind the movies is actually a good way to start an important conversation.

In their award-winning podcast Science(ish), Rick Edwards and Michael Brooks confront all the questions that your favourite movies provoke. Drawing inspiration from a number of their own favourites, this discussion will examine why screenwriters and directors should be praised for starting the scientific, moral and ethical conversations we all need to have – and whether there is more they could do yet.

Movies often get a bad rap in scientific circles, but the Science(ish) takeaway from years of digging into these questions is that science can be more than a powerful storytelling tool: it can also make a positive contribution to the human story.

Michael's latest broadcast role is as science adviser to YouTube’s The Edge of Science.

Rick has written three books, and his debut feature film script is due to start shooting in March 2020.